It’s that time of the year! Many media outlets have claimed that legendary manager Arsene Wenger will be sacked at the end of the season, should the North London side fail to qualify for the Champions League for the second consecutive season.

The Gunners are currently experiencing their worst season under the Frenchman in his near 22-year realm for a variety of reasons: sixth in the Premier League as of writing, out of the FA Cup in the third round, and an embarrassing defeat to Manchester City in the final of the Carabao Cup.

From experienced managers like Brendan Rodgers and Paulo Fonseca to “wildcard” suggestions like Mikel Arteta and Thierry Henry, there is a long list of candidates selected who could replace the Frenchman. Despite all of this, there isn’t a better, realistic candidate available at the moment to succeed Wenger than the current AS Monaco manager, Leonardo Jardim. The 43-year-old is renowned for his outstanding work at his current club, where he led Les Monégasques to their first league title in 17 years.

However, it’s worth noting the Portuguese manager has also done a fantastic job during tenures with the likes of Olympiacos and Sporting CP. Despite being at the former club for less than a year, Jardim controversially left the Greek side despite his team being unbeaten whilst leading the league by ten points. Regarding the latter, the manager led the Portuguese side to a much improved second place finish in the 2013/14 Primeira Liga season in his only year there.

With all of this being said, it’s time to look at some of the key reasons why Leonardo Jardim is the man Arsenal needs to succeed Arsene Wenger.

Fresh, but similar,  tactics and ideas

Despite using both 4-3-3 and 4-2-3-1 formations on occasion in his managerial career, it seems inevitable that Jardim will utilise his beloved 4-4-2 formation should he trade life in Monaco for pastures new in North London. While it’s obviously too early to comment on who the 43-year-old would select for his starting eleven, the below graphic is an intriguing example of how the Gunners could set-up under the Portuguese manager. 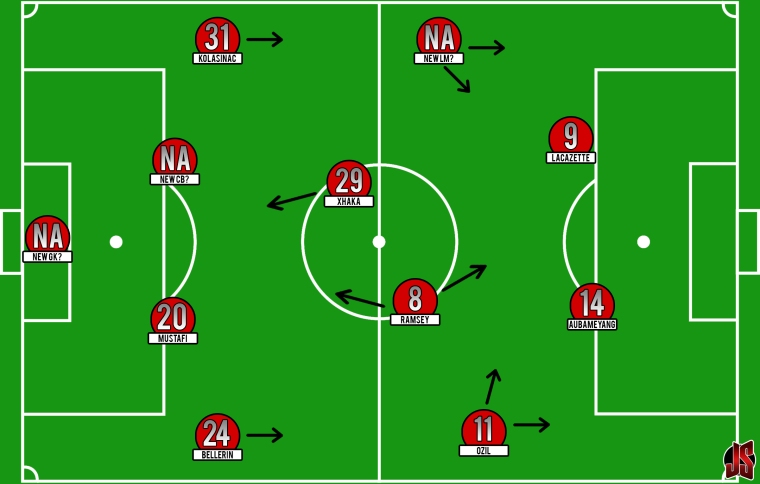 Before going into more depth, I can see at least three signings being required to get the best out of this system. First and foremost, if there’s one area on the pitch the Gunners are significantly lacking in, it’s in the wide roles. Although there are a variety of players at the club who can perform well on either flank (Henrikh Mkhitaryan, Danny Welbeck, and Alex Iwobi to name a few), there’s a massive lack in pure wingers at the club. Purchasing an exciting, but talented, winger like Goncalo Guedes or Malcom would bring about some much-needed star power and pace on the flanks and would be well-suited to Jardim’s system.

Elsewhere, if you’ve watched Arsenal in the last few seasons, it’s becoming increasingly obvious that some key reinforcements are required in defence as well as a brand new goalkeeper. Whether it’s bringing in a highly talented youngster like Alban Lafont, or attempt to purchase someone of top quality such as Kostas Manolas or Kalidou Koulibaly, the club will need to make sure they get their transfers right to improve the team.

Going back to Jardim’s philosophy, one of the most exciting aspects of utilising such a formation is the attacking partnership of Alexandre Lacazette and Pierre-Emerick Aubameyang. Since the arrival of the Gabonese forward, many Arsenal fans have called for the aforementioned attackers to play alongside one another. Taking into consideration Jardim’s usage of the 4-4-2 formation, this system would put this desire from the fans to fruition. If used correctly, Lacazette would be able to make movements without the ball and be utilised more as a poacher whilst Aubameyang would be able to use his flair and speed to roam around the space in attack, more often.

In addition, it’s important for the system to be well-balanced on the flanks both offensively and defensively. The 43-year-old prefers his fullbacks to push forward when attacking with the more advanced players having the freedom to cut inside or drive forward when necessary. In terms of the fullbacks, both Hector Bellerin and Sead Kolasinac have proven their effectiveness when attacking whilst also performing well – to an extent – defensively.

Elsewhere, although their partnership together hasn’t been the greatest this season, I feel as if Jardim would be able to revolutionise Granit Xhaka and would help produce the fantastic pairing with Aaron Ramsey that so many fans expected back in 2016. The Swiss midfielder would take up the infamous number six role whilst the latter alongside him would be the box-to-box midfielder. Xhaka would drop deep in front of the centre-backs to provide defensive support whilst using his superb passing range to initiate attacks from deep. In regards to Ramsey, the Welsh midfielder would act as the engine of the team and be highly influential when the side are attacking or defending.

To give some credit where it’s due, Arsenal has done a good job – on paper – regarding improvements to the coaching staff in the last twelve months.  Clubs legends like Robert Pires and Jens Lehmann were awarded deals to become coaches at the start of the new season whilst fitness ‘guru’ Darren Burgess was also appointed as the club’s Director of High Performance. These appointments were designed to add more experience whilst also trying to reduce the number of injuries the Gunners’ suffered.

However, while the aforementioned appointments were a sign of positivity, the same can not be said about Arsene Wenger’s training methods. Once the producer of the most beautifully played football in the country, the 68-year-old’s former identity has been nonexistent for years. Gone are the days of Arsenal consistently playing beautiful football, gone are the days of being able to beat a top side away from home, the state of Arsenal Football Club today isn’t the same as it was a decade ago.

Looking at the way in which a number of Arsenal players have performed this season insinuates how useless the Frenchman’s training methods are nowadays. One clear example of this is the fiasco of defensive midfielder Granit Xhaka, who Wenger once noted he prefers as “a box-to-box player”. Albeit I can agree the Swiss midfielder has performed below expectations multiple times this season, I can’t help but wonder if the current training methods and team set-up are playing some part in the 25-year-old’s poor-form. For example, there have been a few occasions this season where Xhaka has been forced out of position as an interior in a 4-3-3 formation rather than in his preferred deep playmaker role.

If Leonardo Jardim is given the keys to a new-era at the North London club, all Arsenal players will finally be given a breath of fresh air by learning from a different, younger, coach. Last season, the Portuguese manager’s philosophy finally paid off as AS Monaco clinched the Ligue 1 title whilst also getting to the semi-finals of the Champions League, all while playing some of the best football across Europe. Regarding his tactics, the only manager who was properly able to get the better of the 43-year-old throughout the 2016/17 league season was Juventus boss Massimiliano Allegri in the previously mentioned semi-finals.

In addition to this, an incoming Jardim would help make some suitable changes to the current state of the coaching staff. With a change in manager, current assistant Steve Bould would no longer be needed for his services and could return to his favourable role working with the youth-team, or be changed into a general coach at the club. Also, I would not be surprised if loyal assistant coach Antonio Vieira and fitness coach Nelson Caldeira followed Jardim from Les Monégasques and join the coaching set-up at Arsenal.

Similarly to Arsene Wenger, Leonardo Jardim is another manager that deserves praise for his work with younger players. Kylian Mbappe, William Carvalho, Thomas Lemar, Cedric Soares, and Fabinho are all examples of talented players who have benefited from learning from the Portuguese manager in some capacity.

Throughout his managerial career, the 43-year-old has been accredited for his phenomenal work with young talents with the support of both youth systems as well as the transfer market. Looking at the previously mentioned list, Mbappe, Carvalho, and Soares were all members of their respective team’s youth set-up whilst the manager purchased Lemar from SM Caen and Fabinho from Rio Ave following two loan deals at the club.

With Arsenal likely out of the Champions League for two consecutive seasons, they may not have the funds available to splash like their league counterparts during the summer transfer window. If this proves to be the case, the London club could find solace and follow the successful philosophy Jardim has used throughout his tenure at AS Monaco of purchasing and developing young talents.

When looking at the current Arsenal squad, there are a number of players that would benefit and likely improve under the guidance of Leonardo Jardim. Current academy players like Ainsley Maitland-Niles, Reiss Nelson, and Eddie Nketiah would be able to learn from a new coach with more recent experience of developing and improving younger players. In addition, those with a lot of potential, but are lacking in confidence, like Calum Chambers and Alex Iwobi would also better themselves thanks to the enlightenment from the Portuguese manager.

If Arsene Wenger is finally relieved of his duties in the summer, the Gunners must assure themselves they do whatever it takes to secure Leonardo Jardim’s signature to take over as Arsenal’s new head coach. It could very prove to be the best decision they’ve made in over a decade.

One thought on “Why Leonardo Jardim is the right man to succeed Arsene Wenger at Arsenal.”